With Baffert out, owners of Kentucky Derby prospects training under him will have to take their horses to other trainers. If they hope to win the Derby this year. However, none of the owners have given any indication on when or where their horses will be transferred. Who will be the favorite? This month we will find out.

Tom Ryan of SF Racing, the lead owner for most of Baffert’s Derby prospects, requested all questions be sent via email. After receiving the queries Ryan declined to comment. He instead referred to social media for any additional insight.
Madaket Stable’s Sol Kumin would not comment on any future plans with regard to Baffert. He only noted both Newgrange and Pinehurst were running Saturday in seven-figure races, “and we will try and focus on those for now and try and enjoy them.” 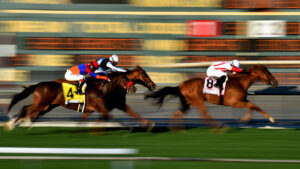 Since his suspension was announced, owners of horses trained by Baffert said any potential transfer to another trainer probably would not come until before the final round of Derby preps, which are virtual automatic qualifiers for the top two finishers. Those races begin March 26 with the UAE Derby (G2) at Meydan and the Louisiana Derby (G2) at Fair Grounds. In each prep, 100-40-20-10 points are awarded to the top four finishers, if eligible. There are six other races of the same value April 2 and 9.

Horses trained by Baffert are banned by Churchill Downs from qualifying for or competing in the next two editions of the Kentucky Derby. Even though the verdict will be appealed, Baffert Baffert’s horses are still ineligible to compete in this year’s Kentucky Derby. What will this mean?